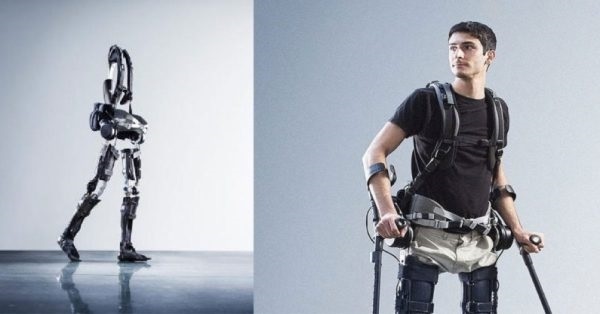 Walking again when you are paraplegic/quadriplegic or becoming a "superman" is no longer an unattainable dream thanks to the development of exoskeletons. It seems that exoskeletons are taking root in our daily lives.

The kick-off of back in the 2014 World Cup on June 12 by a young Brazilian paralyzed in his lower limbs and equipped with an exoskeleton is the most eminently symbolic sign of this. It is indicative of the progress of science in this field: the combination of robotics and neuroscience.

In recent years, robotics has become part of the lives of people with disabilities. Among these innovations, exoskeletons, such as the Rewalk, allow some paraplegics to leave their wheelchairs and walk again. The latter has just received authorization from the US Drug Agency (FDA) to be sold to individuals. An exceptional device that enters everyday life.

Rewalk Robotics: a new walking possibility for the disabled?

Rewalk Robotics is finalizing a new exoskeleton that could change the lives of people with disabilities: a flexible exoskeleton weighing less than five kilos and can reproduce a walking movement.

How does it work?

This exoskeleton looks like a mountaineer's suit with a kind of banana pocket, located at the level of the belt. It integrates motors and cables to hold the joints in place, but also knee pads and sensors placed under the feet.

The great novelty is therefore the lightness of this uniform which weighs less than five kilos, unlike the tens of kilos of the previous exoskeletons. The prototype proposed by Rewalks Robotics allows autonomy of two hours.

Created by Amit Goffer, an Israeli engineer who became quadriplegic after an accident in 1997, the Rewalk exoskeleton allows people paralyzed in the lower limbs after a spinal cord injury to regain their use. It’s fully electronic and covers the legs and thighs of the paraplegic. The two motors are installed at the hip and knee joints. The battery and the onboard computer, connected to motion detectors, are placed in a backpack.

The user can select the actions he wants to do (get up from his chair, stay upright, walk...) thanks to a command that he wears on his wrist. With the help of his crutches, the user leans forward. This displacement of the bust is analyzed by the onboard computer which instructs the engines to take a step. The device then mimics the movement of the legs. The speed of walking, the degree of flexion of the knee or hip are parameters modifiable according to each patient.

Who can use it?

Because of its flexibility, this exoskeleton is only for people with disabilities in the lower limbs, including people who have suffered a stroke or those with Parkinson's disease.

In the case of a stroke, many people may still get up but have trouble moving their feet and legs. Others can no longer even trigger the walking process. This new exoskeleton would therefore be an aid to move the legs; either permanently or as a progressive rehabilitation tool at the service of the disabled.

The "Personal Rewalk", the second creation of the Israeli company Argo Medical Technology, after the Therapeutic Rewalk, was designed to respond to everyday situations. It allows walking at home, at work as well as outside and on different terrains.

For nearly two years, many rehabilitation centers have been offering the Rewalk as an alternative to other existing equipment, such as vertical chairs. Many patients have been able to benefit from this walking exoskeleton.

Currently, the health benefits brought by the use of the exoskeleton are based on patient testimonials. Users report better transit, better physical fitness. Some studies highlight an improvement in venous return and cardiac function, maintenance of bone capital which disappears by about 40% in two years in young subjects with paralysis.

But beyond the physical benefits, the feeling of verticality, and the gain of autonomy, the possibility of looking their interlocutors in the eyes provide patients with better self-esteem and psychological well-being.

The FDA-cleared Rewalk is not for all paralyzed people. Only patients with lumbar 7th thoracic vertebra (T7) and 5th vertebra (L5) can use it. In therapy, the Rewalk can be fitted to patients with higher spinal cord involvement between T4 and T6. The price can also be a hindrance, but the cost is expected to reduce significantly as the device enters full commercialization.