Is the stock market rigged against you?

When we hear the word “insider trading,” most people think of something illegal.

Images of Martha Stewart being hauled off to jail in an orange jumpsuit start racing through our heads.

But the fact is, it is not against the law to engage in insider trading.

As long as you follow the rules, at least.

U.S securities laws require “insiders” (such as officers, directors, 10%+ owners) to report purchases, sales, and holdings of their company’s stock.

When they buy or sell, they’re required to file Form 4 which makes the public aware of their transactions.

The form must be filed within two business days following the transaction date.

So if you know where to look, it’s easy to watch what Wall Street insiders are doing.

And when you look at who’s buying and selling right now, you see some alarming trends.

More on that in a second.

First, let’s back up and take a look at what’s been going on in the stock market over the last year.

As you know, the stock market was pushing new highs back at the beginning of 2020.

It included 3 of the largest single-day losses in the history of the stock market on March 9, 12 & 16.

Trading was halted twice during the stretch — on March 9 and March 12. It was the first time the 7%-drop circuit breaker was triggered since the SEC implemented it in 2013.

And April 2020 saw the market roar back to have its biggest month in history.

And the rebound continued for most of 2020, hitting record highs once again by the end of the year.

And that trend has continued for the most part into 2021.

The big question is, who made money and who lost money in all this turmoil?

More on that in a bit. First, let’s keep digging a little deeper.

The Stock Market outlook for 2021 (according to the “Experts”)

Many stock analysts are saying this bull market could keep going for quite a while due to all the new stimulus money that’s being pumped into the economy.

In the meantime, thousands of new small-time investors are dumping money into the market, many for the first time in their lives.

In fact, Robinhood, a free trading app, has been reporting a record number of new users every month since Covid-19 entered our vocabulary last year.

All of these amateur investors are trying to “ride the wave” of the stock market’s rise.

And why not? Earnings reports coming in say big banks made bank in Q4. Companies like Zoom have appreciated 1,500% over the last year.

And analysts are all saying “buy, buy buy.”

What Insiders are doing

But the story is quite different from an insider perspective.

The first 2 weeks of 2021 showed a LOT of activity among insiders.

And guess what they’re doing?

For example, on January 6, the SEC reported 147 transactions by “insiders.”

Insiders dumped $682M in stock in a single day with those 147 transactions.

And the trend continues.

This past week, 295 insider trades cashed out $2.8 Billion in stock.

Only 21 insiders trades were “buys” this week

You can see all the insider trades here.

Getting back to Zuckerberg…

As we mentioned earlier, Mark Zuckerberg has been one of the most active insiders these past 2 weeks.

36 of the top 38 financial institutions have Facebook as a “Buy.”

But that’s not what Mark is doing.

It’s possible he sold on the 14th and 15th too. He wouldn’t need to report that until next Monday.

All sells. No buys.

You can see all of Facebook’s inside trades at the bottom of this page.

After all, these transactions account for less than 1/10 of one percent of his holdings.

But that’s kind of the point.

This is the way the game is rigged…

Those in the know make a fortune when their stock goes up.

And they can still make a fortune when their stock goes down.

Because remember, insiders like Zuckerberg didn’t “buy” their stock at retail price.

They either got in early when the price was super low. Or they buy shares at a deep discount by exercising stock options. Or they are given shares as compensation.

Any way you slice it, the insiders are ALWAYS making money when they sell.

You see, since Zuckerberg started his selling spree in early December, Facebook stock has fallen 12.65%.

Do you think that has hurt Mr. Facebook CEO?

Not at all. He keeps selling and making millions each day.

It’s the little guys and gals who jump into a rising market too late (and without specific knowledge) get screwed in the long run — or even crushed when the next crash hits.

Think back to last March and April…

Remember how the market had some of the biggest single-day drops AND gains during the Corona Crash of 2020?

Well, guess who was winning and losing during that time?

The anatomy of a market shakedown…

Insiders and large professional investors initiated the selling that triggered the Corona Crash by making large exits to protect their profits.

These large “sells” triggered stop-loss limits for robot traders (running in Big Finance firms), so they started selling too. The cascade continued as new stop loss benchmarks were hit.

By the time amateur investors realized what was going on, they’d already lost a lot of money. Many panicked and sold too late for a big loss.

Then, after a few days of stability, insiders, robots, and professional investors saw bargains and started buying again.

Prices soared, but then a few insiders decided to take profits again.

With each vicious selloff, more and more of the little guys bailed.

Many had originally decided to hold tight because they were told to be “in it for the long haul.”

But after weeks of vicious volatility that looked like anything but a “normal correction,” they finally got scared enough to sell all their shares for big losses.

And they stayed out too. Which means they never participated in the huge April “recovery” because they were too spooked.

They didn’t start coming back until around August, when all the stimulus money was making the economy feel normal again.

And now, small-time investors will keep piling in until the next time insiders and professionals decide it’s time to grab their profits and run.

It’s a vicious cycle that keeps repeating year after year, decade after decade.

Why is this such a big deal?

One of the most common phrases you hear in the financial media is about using the stock market to “save for retirement.”

The mantra is that you should regularly set aside a portion of your monthly income and earmark it for retirement.

That’s why contributing to a company-sponsored 401(k) is so popular.

It feels good to be “saving” for retirement.

And setting aside a portion of your income to pay yourself first is smart. We recommend that too.

But putting money in the stock market is NOT “saving” for retirement. And it’s not paying yourself first.

As we’ve seen, the value can go up or down in a flash. And unless you’re an insider or professional, you’ll always be late to the dance.

So from a statistical standpoint, mindlessly putting money into the market with the expectation that it will always go up is foolish.

Can it work? Sometimes, yes.

But unless you are an insider or a professional, investing in the stock market is more like gambling than investing. And it’s certainly NOT “saving” for retirement.

And the damage to small investors is real.

More often it steals a dream of a better life.

But most of the time it literally shatters the financial plans of regular folks who are just trying to build a life they love.

A safer way to store money and find balance…

And one that isn’t plagued by insider trading… 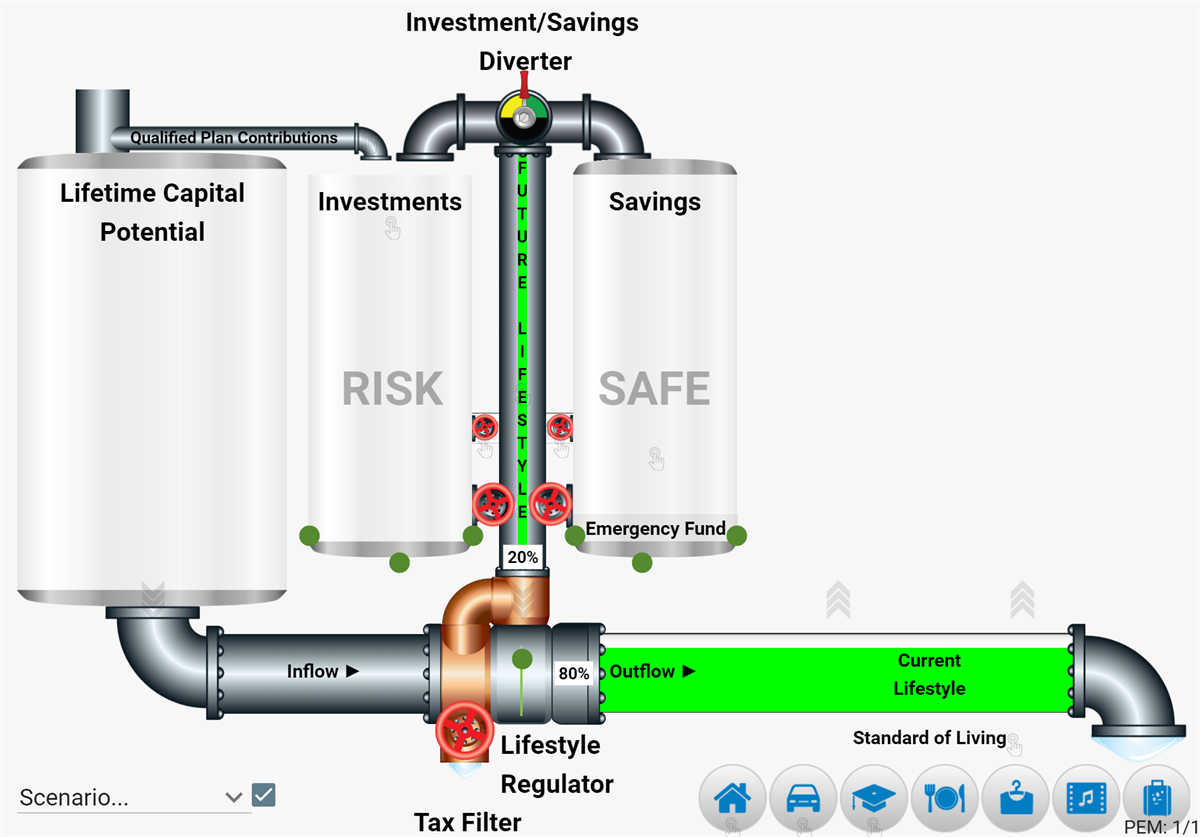 Or rigged in the favor of professional investors…

We feel obligated to share that with our tribe.

Then let's have a one-on-one conversation about how money really works - how certain financial products play a role in solving your challenges, and how they work together to impact your personal finances.

In the continued pursuit of trying to help clients better understand the complex and difficult nuances of the multitude of financial products available and more importantly how those products impact both your current and future lifestyle, the Personal Economic Model (PEM) was born.

The Personal Economic Model or PEM is a cash flow picture of what happens to your money. At first glance, it does not look like much more than something you might see in the basement or mechanical room of your home. Understanding the PEM will help you design a plan to live life today to the fullest while keeping in mind what you need to do to secure your future lifestyle.

There are only two ways to improve your present financial position. The first is to find better financial products that offer the potential to pay higher rates of return but often require more risk. The second is to be more efficient by avoiding unnecessary losses.

The focus of this article is not so much about where or where not to put your money but seeks to help you better understand and navigate the turbulent waters of the financial world with solid financial information so that you can be more efficient.

We believe "There is more to be gained by avoiding the losses than picking the winners." Give us a call and let's have a conversation.