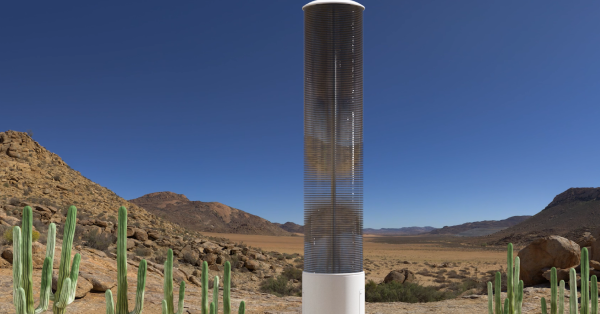 Mechanical Trees Could Be the Solution to Global Warming

Two centuries of burning fossil fuels and other human activities have added more carbon dioxide gas into the atmosphere –much more than nature can remove.

As CO2 accumulates in the atmosphere, more and more heat is trapped near the Earth’s surface, resulting in global warming.

There is currently so much carbon dioxide in the atmosphere that cutting down emissions alone won’t solve the global warming dilemma. Therefore inventions to help capture CO2 directly from the air are the next big move.

So where does all of this CO2 come from?

Carbon dioxide emissions can be of natural origin: from the subsoil, forest fires, volcanic eruptions, or animal and plant respiration.

CO2 originating from human activities is responsible for 55% of the unnatural greenhouse effect.

As part of the fight against global warming, measures are being taken to reduce emissions from human activities. But as earlier mentioned, companies and authorities are taking a more aggressive approach to capture CO2 from the air, and one such technology is the use of “Mechanical Trees”.

Imagine a forest made up of artificial trees, each absorbing up to 1,000 times more CO2 than the natural trees. This tree then stores the captured CO2 in liquid form for disposal or use in other areas. Sounds futuristic? Well, the future is here.

Mechanical Trees are already a reality today. Klaus Lackner, Ph.D., director of the Center for Negative Carbon Emissions, and professor at the School of Sustainable Engineering at Arizona State University (ASU) is the inventor of the Mechanical Tree™.

His Mechanical trees are 30 feet tall and made up of a stack of 150 absorbent discs. When the disc columns are extended, the discs get exposed to air and trap CO2 from the atmosphere, as the usual tree leaves would do. Once saturated with CO2, the discs are lowered into the column and the captured CO2 is collected for sequestration or commercial use.

According to Klaus, a 12-tree cluster will be able to remove a metric ton of CO2 from the atmosphere per day, at an estimated cost of less than $100 per ton. This is so far the cheapest technology of CO2 removal across the direct CO2 capture industry.

Commercially, the captured CO2 has many uses from hardening cement and injecting it in oil fields for increased production, to powering cars and creating insulation foams for housing. Lackner and his team have been working on the Mechanical Tree for decades now –they were the first scientists to suggest direct capture of CO2 from the air.

“We are using passive Direct Air Capture technology,” Explains Lackner. This approach eliminates the need for blowers and fans used in other direct capture methods. The technology passively uses ambient wind to capture CO2. The only energy you will need is for processing the trapped CO2, which is how this technology is far more cost-effective.

Professor Lackner, The ASU’s Center for Negative Carbon Emissions, and the School of Sustainable Engineering are partnering with Carbon Collect Limited, a European-based international climate technology company. A few prototypes of the Mechanical Trees exist, and Carbon Collect has plans to install Lackner mechanical trees globally in the next decade.

Conventional tree planting by hand to combat climate change at this point is a drop in the ocean. A study has shown that we would have to plant up to half a trillion trees to capture approximately 205 gigatons of carbon.

In the same study, it’s estimated that planting a billion hectares of trees by hand can take anywhere between one and two thousand years. Full maturity of such established trees could take 50 more years. Reyad Fezzani, vice-chairperson Carbon Collect argues that constructing trees is much faster and their technology has the potential to solve climate change at a much lower cost.

So, while the mechanical tree technology is not yet well refined, it’s currently the most efficient and cost-effective direct CO2 capture we have on record. Carbon Collect will receive a $2.5 million funding from the Department of Energy (DOE), and this is expected to accelerate commercialization and scaling up of the technology.