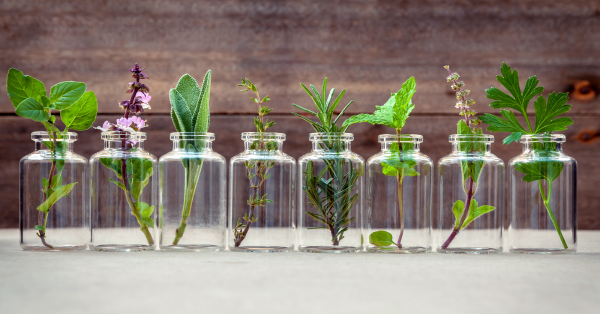 From relieving nausea to reducing stress symptoms, there are a variety of herbs that have numerous health and therapeutic effects. As you may know, herbs and plant extracts are the foundation of medicine, dating thousands of years back.

In this article, we discuss herbs that offer numerous health benefits and can be easily incorporated into foods, drinks, or supplements.

Black pepper is known to stimulate the digestive system, clear lung congestions, and relieve coughs. Generally, it’s useful both topically and internally for arthritis and rheumatism, cold, flu, viruses, sinus infections and sore throat, as well as headache and fever. It increases thermogenesis for weight loss and is a catalyst for other herbs. Be careful not to use it excessively as doing so may slow down liver metabolism.

Basil is a healthy herb in the mint family known to relieve the stomach and act as a natural disinfectant. It is widely used throughout the world but it’s most common with Asian and Mediterranean cuisine.

It’s recognized for its Adaptogenic properties, and it helps the body resist stress and adapt to new situations. It also helps lower blood pressure and blood cholesterol levels. Basil is also effective in treating respiratory illnesses such as colds, coughs, bronchitis, pleurisy, and asthma.

You can utilize basil in many ways: raw, chopped, in juice, in the ointment, in infusion, in the form of essential oil, or even dried in powder.

Research-based evidence has shown antioxidant and anti-inflammatory properties, Anti-sugar, anti-microbial, and anti-cancer properties, and reduces fat and heart fat. This therapeutic potential can be traced back to certain oils and active compounds, such as cinnamaldehyde, cinnamic acid, and cinnamon, found in cinnamon.

Just keep it in the kitchen or even on your desk to remind you that it sprinkles food and drink throughout the day.

Garlic is not only full of flavor, but also full of health benefits. It contains a wide range of trace minerals, including copper, iron, zinc, magnesium, germanium, and, above all, selenium. Garlic has been shown to help prevent blood clots and is linked to lowering cholesterol.

Use garlic for homemade dressings, sauces, and salads, to season chicken, red meat, and tofu, and to sprinkle your vegetables. With fresh garlic, the finer the bulb, the stronger the flavor. To lightly infuse your food with a mild garlic flavor, use whole garlic clove without breaking.

Ginseng is a general tonic used by modern Western herbalists as well as traditional Chinese doctors. It could stimulate and strengthen the central nervous system in cases of fatigue, physical exertion, illness, injury, and prolonged emotional stress.

Ginseng's affinity with the nervous system and its ability to promote relaxation makes it useful in stress-related conditions, such as insomnia and anxiety.

Other than helping to relieve nausea, ginger also eases cold and chill symptoms, motion sickness and reduces circulatory problems. Ginger can also help maintain a healthy heart. For centuries, Ginger has been used in traditional medicine systems all over the world to treat a variety of cardiovascular diseases. Ginger has anti-inflammatory properties, which reduce oxidative stress that damages the heart.

Add dry ginger as a spice to any cooked meal and use fresh ginger in Tea Mixes These are great ways to incorporate these spices into your diet for their health benefits.

In addition, it is useful for soothing and stimulating the nervous system and healing colds and coughs. Inhaling sage essential oils and drinking sage tea helps fight lung issues and respiratory illnesses. That is attributed to sage’s antibacterial, anti-inflammatory, antioxidant, and antifungal properties.

Rosemary is a well-known diuretic. It contains flavonoids, carnosic acid, lipids, diterpenes, and phenolic acids. It is a perfect representative of aromatic herbs. It is appreciated for alleviating fatigue, promoting digestion, and is an effective option for boosting the memory and cognitive functions. Lastly, it’s a perfect antiseptic and antibacterial herb and detoxifies and cleanses the body.

Dill is widely used in Europe and Asia and is a common herb added to ready meals and salads, in its dry or fresh form. It has a fresh scent and adds flavor to any dish.

But this famous cooking ingredient is credited with great medicinal potential. It’s often used in traditional medicine to prevent and manage various illnesses such as colic in infants, digestive issues, and respiratory illnesses.

This healing herb can also help lower cholesterol and glucose levels in the blood. Adding dill to your diet not only contributes to a delicious experience but may also provide potential cardiac protective effects, although more research is needed to validate the research results.

Note: While herbs have undeniably great health benefits, it’s important to keep in mind that they’re best used as supplementary and not as a primary means of treatment.

This smoothie is not only delicious, it's also perfectly designed to include five key ingredients that work together in synergy to pull heavy metals like mercury, lead, aluminum, nickel, copper, and cadmium out of your organs where they accumulate.

Toxic heavy metals are virtually everywhere, and are present in all kinds of things that we come in contact with every day, such as aluminum cans and aluminum foil, batteries, metal cookware, old paint, and even the foods we eat. For instance, pesticides and herbicides (which are hard to completely avoid even on a strict organic diet), are a common source of toxic heavy metals. As a result, most of us are carrying around heavy metals that have been with us for almost our whole lives and which have burrowed deep inside our tissues. We are also born into this world with heavy metals already inside our livers. You can read more about how this happens in Liver Rescue.

Unfortunately, it is these “old” metals, the ones that have been lurking in our system for prolonged periods of time, that pose the greatest threat. For example, over time toxic heavy metals can oxidize, causing damage to surrounding tissue and promoting inflammation. They literally poison our bodies, and can inflict damage on virtually every system and organ, including our brain, liver, digestive system, and other parts of our nervous system. Toxic heavy metals put an immense burden on our immune system, leaving us vulnerable to a variety of illnesses.

While toxins of every kind are harmful, heavy metals pose a unique threat. Not only are they damaging in their own right, they are also a form of neurotoxin (a poison that disrupts nerve function and confuses your immune system). Heavy metal neurotoxins can inflame and irritate our central nervous system (especially our brain), causing multiple symptoms such as memory loss, brain fog, fatigue, and depression. Toxic heavy metals can also promote inflammation in the digestive tract, releasing poisons into our gut as well. As if this isn’t bad enough, heavy metals also serve as a source of food for viruses, bacteria, parasites, and other pathogens in our body.

For example, heavy metals can serve as a feeding ground for Streptococcus A or B, E. coli, C. difficile, H. pylori, and yeast cells. This can create an overgrowth of multiple bacteria in our gut, resulting in a condition known as SIBO (small intestinal bacterial overgrowth), which is characterized by bloating, abdominal pain, diarrhea, constipation (or both), and can lead to nutrient deficiencies. Additionally, when viruses such as Epstein-Barr and shingles feed off toxic heavy metals, this can produce symptoms such as tingling, numbness, fatigue, anxiety, heart palpitations, ringing in the ears, dizziness, vertigo, eczema, rosacea and psoriasis, as well as neck pain, knee pain, foot pain, pain in the back of the head, and a variety of other aches and pains that are often attributed to other causes.

It's virtually impossible not to take in a certain amount of these toxic heavy metals in our modern era, so it's vitally important to our health that we get them out before they can wreak further havoc on our health. Thankfully, it's relatively simple to remove them from our organs if we consume the right foods to do so. Adding the following all-star team of foods to your diet and being diligent in your efforts to consume them every day will go a long way toward ridding your body of heavy metals:

Barley grass juice extract: prepares the metals for complete absorption by the spirulina. This nutritive grass has the ability to draw heavy metals out of your spleen, intestinal tract, pancreas, thyroid, and reproductive system. Drink 1-2 teaspoons mixed in water, coconut water, juice or the smoothie recipe below daily.

Cilantro: Goes deep into hard-to-reach places, extracting metals from yesteryear (so it’s great for that mercury inheritance you’re carrying around!). Blend one cup in a smoothie (like the one below), juice, or add to salad or guacamole.

Atlantic dulse: In addition to mercury, this edible seaweed binds to lead, aluminum, copper, cadmium, and nickel. Unlike other seaweeds, Atlantic dulse is a powerful force for removing mercury on its own. Atlantic dulse goes into deep, hidden places of the digestive tract and gut, seeking out mercury, binding to it, and never releasing it until it leaves the body. Eat two tablespoons of flakes daily, or an equal amount of strips if it’s in whole-leaf form. Note: As it comes from the ocean, if you are concerned about the dulse itself having mercury, be aware that Atlantic sea dulse will not release any mercury it might possess into the body. It holds on to the mercury as it works its way through, and even grabs onto other metals along the way and drives them out as well. Atlantic dulse is a critical part of the team because it can hang out near the finish line (i.e., our colon), waiting for the other foods that have been grabbing on to heavy metals along the way. It serves as emergency backup, helping ensure that all the heavy metals that made it as far as the colon actually leave the body.

In a high speed blender, blend all ingredients until smooth. If a thinner consistency is desired, add up to 1 cup of water. Enjoy!