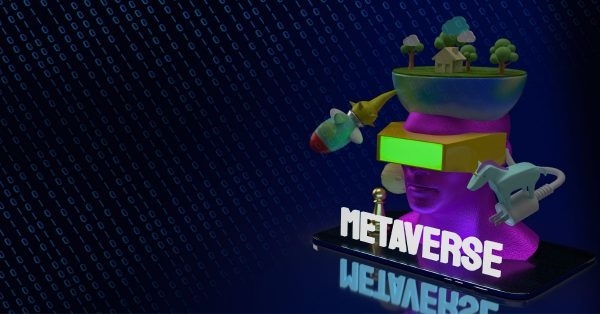 What the heck is the Metaverse?

Metaverse is a kind of new cloud technology that will change the way we connect. These are immersive technologies that allow a sense of true presence. It will be made a reality by the use of AR (Augmented Reality) and VR (Virtual Reality) technologies, among others, to merge the physical and virtual worlds and create new opportunities for all.

In this virtual world, many users will be able to exist simultaneously and interact in infinite ways. People will be able to play, work, meet, collaborate, shop, walk, watch movies, and listen to concerts, and do everything they can do in the real world, and most importantly, the metaverse will interact with the real world in countless and unpredictable ways.

How far are we from the Metaverse?

It will be years before the Metaverse becomes a reality. It requires infrastructure and computing power that does not yet exist, as it must be able to handle the countless connections of people engaged in a shared, simultaneous, and synchronous experience.

A large number of new technologies, protocols, innovations, and specific discoveries will also be needed for it to work at its best.

For example, huge computing power will have to be built into a tiny frame of glasses. It will require graphics and network chips, holographic waveguide generators, sensors, batteries, and speakers, and everything will have to fit in a miniaturized space.

Where are we now?

There are already several companies developing hardware for virtual, augmented, and mixed reality, such as headsets and glasses.

The visionaries at Silicon Valley are convinced that this immersive, networked, and three-dimensional world will eventually replace the two-dimensional internet that exists today and are already investing financial and human resources in this project.

The Metaverse is closer than we think. Just look around: Fortnite or Facebook's Horizon – a virtual reality game in beta testing – and other projects by big tech companies in similar products. Not to mention how the pandemic has encouraged millions of people to spend their days immersed in cyberspace.

The Metaverse in Neal Stephenson's novel

The term Metaverse comes from Snow Crash, published in 1992, the third and arguably best novel by Neal Stephenson, an American science fiction writer.

The book's main character, Hiro Protagonist, delivers pizza for the mafia, which has taken control of the territory of what was once the United States.

When he's not working, Hiro connects to the Metaverse: a networked virtual reality in which people appear with their "avatars" engaged in the mundane (conversation, flirting) and martial (sword fighting, espionage, etc.) activities.

Like the Internet, Stephenson's Metaverse represents a collective and interactive world that is always online and beyond the control of any person or institution. As in a video game, it is the people who inhabit it and control the characters that determine its dynamics.

The Metaverse according to Mark Zuckerberg

Excerpt from a conversation between CEO Casey Newton and Mark Zuckerberg

Newton: You've told your employees that your future vision of Facebook is not the two-dimensional version you're using today, but something different, something called the metaverse. What is a metaverse and what parts of it does Facebook plan to build?

Zuckerberg: That's a big theme. Metaverse is a technology that encompasses many companies, if not the entire industry. We can say that it is the successor of the mobile internet. And it's certainly not something a company is going to build, but I think a lot of our next chapter will help build it, in collaboration with many other companies, creators, and developers. You can think of the metaverse as an immersive, embodied Internet, instead of just viewing the content, you're directly there. And you're there with other people as if you're in another place, where you're having different experiences that you couldn't have on a 2D app or a web page, like dancing, for example, or practicing different types of fitness.

I think a lot of people when they think of the metaverse, only think of virtual reality – which is certainly an important part of this phenomenon. And that's clearly a very engaging part because it's the technology that offers the clearest form of virtual presence. But the metaverse isn't just virtual reality. It will be accessible via all of our different IT platforms, VR and AR, but also PC, but also mobile devices, and game consoles. In this regard, many people think that the metaverse is mainly about games. And I think entertainment will clearly be a big part of it, but I don't think it's just entertainment. In reality, it is a persistent and synchronous environment where we can be and act together.

The Metaverse according to Matthew Ball

The fundamental difference between the Internet and the metaverse is the idea of "presence." Matthew Ball, who led long reflections on the concept of Metaverse, collected in a publication entitled Metaverse Primer, developed the definition of the Metaverse which consists of seven peculiarities:

The Metaverse is a successor to the modern internet, with all the same content but fewer limitations on where and how to access that content. Of course, many current online platforms allow users to move quite freely within the limits of specific services.

However, they limit interoperability between platforms: you can build anything in "Minecraft", but you can't transfer your creations to a "Fortnite" map. The Metaverse will allow users to generate their own content. And then, distribute it freely through a wide-open network.